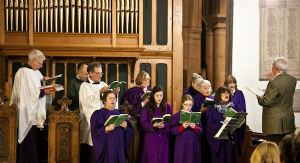 A new children's choir is being formed at St Dunstan's. It is an all-ability choir and the only requirement is to love singing. It is intended for children of age 8 upwards, although other ages are welcome to apply. Already, members of the choir have sung at a carol service before Christmas, and there will be further opportunities to sing in public during the course of this year. But the most important part is to have fun! Under the direction of choirmaster and organist, Dr Michael Robertson, the choir meets on a Thursday from 6.00pm until 6.45pm. If you think your child or children would be interested, please don't hesitate to contact Michael for more details. His email is stdunstansorganist@gmail.com

Dr Michael Robertson (organist and choirmaster) is a working musician, experienced teacher and academic. He studied the organ with John Railton and Robert Munns before going on to the Royal College of Music. After graduating from the RCM., he concentrated on the harpsichord and studied with the distinguished Dutch harpsichordist, Gustav Leonhardt. He made his solo debut at the Wigmore Hall in 1976 and has since played at most of the major London concert halls.

Michael now gives regular recitals and accompanies choirs both in the UK and in mainland Europe.

As a teacher, he was Director of Music at Marlborough House School in Hawkhurst between 1988 and 2012. As an academic, he gained his PhD in 2004 and this has been followed by two published books and articles in various journals.

There are few services at St Dunstan’s that do not have a significant musical contribution. An anthem is sung on most Sundays and the regular Eucharist settings are choral. During Advent and Lent, the settings are by a former member of the choir, the late David Wigram.

The choir comprises the normal soprano, contralto, tenor and bass parts and practises each week on a Thursday evening, 7.00pm until 8.30pm. The choir’s repertoire is broad-based, ranging from music by Henry Purcell to that of the present day.

New members are always welcome, especially contraltos or male altos and anybody interested in singing with the choir should contact the organist through the church office or email, 'click here'

The organ, originally by Henry ‘Father’ Willis is highly regarded. Built in around 1856, it is thought that some pipework came from the famous Great Exhibition organ, although this is hard to confirm.

The instrument was moved to its present position in the North aisle in 1901, when it was also enlarged by the firm of William Hill.

A substantial rebuild was undertaken by Nicholson & Co in 1982.

It has three manuals and pedal; past and present specifications are given on the website of the National Pipe Organ Register.

It is now in the care of Henry Willis and Sons and tuned to the ‘Willis’ temperament.